I really wanted to have the first new show of the year up this weekend.Â  Unfortunately, I’m just now getting back on my feet from having come down with one of the traditional winter illnesses, and the voice isn’t quite there yet.Â  I’ve got things all lined up jsut waiting on me…

Hang tight loyal listeners, year 4 of The Acapodcast promises to be full of great things.

Brian Ibbott over at Coverville ( The all-covers podcast.Â  Including a cappella covers.) received a meme that he sent my way, about posting the sixth photo on the sixth page of your Flickr photo stream.Â  I’m using Picasa instead, but in the spirit, I dug up a music related picture to share with you. 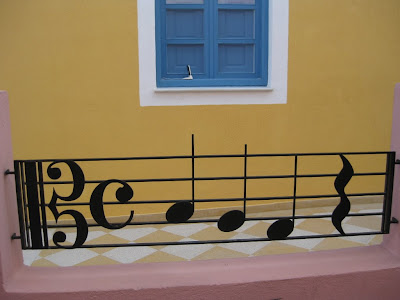 The music geeks in the audience will recognize it as an Alto (or C) clef.Â  For those of you only passingly familiar with sheet music, most sheet music is written in Treble and Bass (or G and F if you prefer) clefs.Â  The Alto clef was a lot more popular in early printed music (here I show my Nerd Credentials), and unlike the other clefs, isn’t as fixed in place.Â  It can be slid up and down the staff, and whatever line it centers on is middle C.Â  You can see why that’d be really popular in the days of woodblock printing: a simple way to fit everything on the staff without actually transposing anything!

To give some context to the picture, I was on Santorini (Thera) recently as part of my honeymoon cruise around the Mediterranean, and passed a house with this as part of the fence out front.Â  The other parts were the Treble and Bass clefs, of course!Â  Each was a single bar of music.Â  Neat fence, no?

I’m talking about the East Coast A Cappella Summit of course.Â  I can’t make it to ECAS this year, but I had a blast last year, and this year’s looks to be even better.Â  If you do go, how about taking a few notes (ha, get it?) for me and letting me know how it goes.

The summit starts tonight, and goes all weekend long.Â  I’m including the ‘radio’ ads for the summit, because they’re fun commercials.

Hey all you Acapodcast fans, your host here.Â  I was going to have a show out tomorrow, the regular Thursday night, but I’m knocked out right now by a cold I think I picked up at last weekend’s Superbowl party.Â  (American Football Championship for the international crowd)Â  So I’ll push that out this coming weekend.Â  But that means I’m not going to be able to tell you on the air about some scheduled downtime coming up.Â  Starting Friday night, and going until about midday Saturday (depending on what time zone you are in), the Acapodcast will be undergoing a server migration, and will be offline.Â  No website, no show feed, and e-mails will be queued up during that time.

Don’t worry, this is all a good thing, ultimately.